The Reason You NEED To Watch 13 Reasons Why

And Seven Things to Discuss After Watching It

Just an FYI, there are a few spoilers up ahead...

You need to watch 13 Reasons Why.

If you're a middle or high school teacher or have your own teenager, I am sure you've heard about 13 Reasons Why (13RW). But if by chance you haven't, let me introduce it. 13RW is the latest YA novel to be adapted to the screen. The topic, 13 reasons why I committed suicide. And there's really one reason that you need to watch it...

...because your kid is watching it. And it's way too heavy of a topic to just be consumed as entertainment.

Seriously, I don't really care what your thoughts are about how immature kids are, the low quality of their entertainment choices or the ridiculousness of teenage problems 13RW is a must-watch for the simple reason that kids are consuming it like candy and they need to understand the deeper issues and themes coursing through the show!

// Sidebar // 13RW was produced by singer, actress Selena Gomez. And while she may not be important to you, she's the #1 follow on Instagram and is rumored to make about half a million for a singled sponsored Insta post. Needless to say, she has some major pull in the world of teenagers.

My Thoughts on 13RW

Like many adults, I was hesitant to watch the show. After reading the synopsis I wasn't intrigued by the topic of suicide and shrugged it off as another teen phenomenon I didn't need to get caught up in. But I quickly realized that my students were into it and that I needed to know what was going on.

From the first episode, I was completely hooked and I'll admit I binged watched the whole show in a week. It had great production value, quality acting, and an intriguing storyline. As I continued to watch, it was a little too easy to forget the heaviness of the show and just consume it as entertainment. And it's that little fact, that may me feel a bit nauseous.

If I was needing to consciously look for the greater themes as I binged watched, there is no way teenagers were watching and thinking about the gravity of the issues being portrayed. That's when I knew, this show is a must-watch for every teacher and parent of teenagers. Not only watch it but also discuss it!

Before we get to the discussion, there were definitely some big issues I took with this series. Like...

However, I still think the show does a good job of characterizing the teenage experience in 2017...

For these reasons, I think the show has the potential to be a powerful conversation starter, if counselors, teachers, and parents are willing to use it as one. And to help jumpstart the conversation, here are 7 things to discuss about 13RW!

7 Things to discuss with your kids after watching 13RW*

Of course, there's no end to what you can discuss after watching this series, so below I've shared discussion thoughts centered on a few of the issues that spoke to me. At the end of the post, I've also linked to some thought-provoking articles around the web.

Rape, sexual harassment, stalking, bullying, family instability, drugs, and alcohol...it all plays a powerful role throughout the show. And, along with it comes numerous unhealthy coping strategies. Take time to identify unhealthy coping skills displayed in the series and discuss healthy opinions both for the characters on the show and for your kid in real life.

Consent is an issue that comes up multiple times in the series. We see horrific examples of consent not being given as two characters are victims of rape. And we see a few examples of another character respectfully asking for consent. I don't care if you feel uncomfortable talking to your kid about sex, teenagers need to understand that consent is non-negotiable.

3)  The necessity for sharing with a trusted adult

Over and over again the characters in 13RW fail to talk or just straight-up lie to the adults in their life. The reality is that kids on-screen and in real life are facing adult stuff on a regular basis. Adult stuff that they are not emotionally and intellectually mature enough to deal with. Open up the lines of communication, making sure your kid has access to a trusted adult to confide in.

Note for adults: From my own experience with teens, I think kids often feel like they will be judged or punished if they share their deepest secrets. We need to be sure that the kids in our life know that their safety and security is the #1 priority and that we are always there to listen with an open, non-judgmental heart!

4) Be present and ready to listen, so when people reach out you can help

A number of times, Hannah attempts to reach out to people close to her. We see her parents are busy with the store, Zach feels embarrassed and doesn't know what to do, the school counselor is distracted. We need to learn how to be present so we can see the pain people are going through and be ready to listen and act when people reach out for help. You don't want to realize after the fact that you could have positively impacted someone's life (think about the suicide and drunk driving posters that show up at the school too late).

What we do powerfully influences those around us. Every single one of our subtle and not-so-subtle words and actions has a transcending impact. Whether it's positive or negative, kind or mean, truth or a lie, it changes people. A potent example of this is how Sherry's inability to face the guilt and shame of wrecking her car leads to the death of a classmate.

6) There are appropriate ways to solve grievances

This is one of the biggest issues I have with the show. I was incredibly bothered by Hannah's treatment of Tyler. Now, I am not saying Tyler wasn't in the wrong but I don't agree with the bullying Hannah set upon him through her tapes. Towards the end of the show, we see that the pervasive bullying led Tyler to purchase a large number of firearms (either to harm himself, schoolmates, or both). How exactly is Hannah being different from anyone she exposes in her tapes?

Teenagers need to learn that there are appropriate ways to solve grievances. There are strategies founded in empathy, kindness, and forgiveness. If we want our kids to make the world a better place, we can't be okay with this eye for an eye mentality.

7) Mental Illness is serious, don't try to handle it on your own

Mental illness is not something that can be handled on your own. There is nothing to be ashamed of concerning mental health and the best thing you can do for yourself is to seek professional help. Make sure your teen knows this, whether it's for them or for a friend in need.

Of course, these are just a few talking points that could come from watching 13RW. By starting a conversation with your kid, who knows what will come of it! Ultimately, the point I am trying to make is, know what your kid is being entertained by and talk to them! It may connect more powerfully to their life than you know or want to admit! 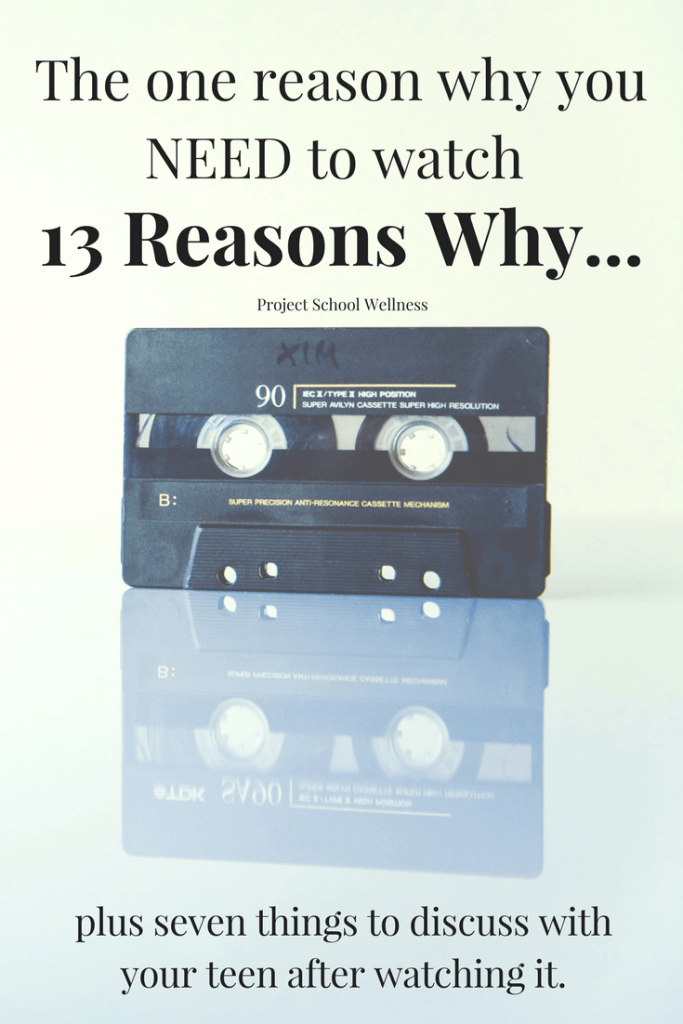 Other discussion resources around the web...

This show has caught the interest of many concerned viewers. A number of them, like me, have shared on the web. Here are a few articles I found to be very interesting and useful when discussing the heavy themes of 13RW!

*I am not a school or mental health counselor, so by no means is this a definitive list of things to discuss.

P.S. Looking for more ways to use pop culture to teach kids??? Check out our posts on Inside Out and Wonder!

We've got you covered! Get instant access to five free health lesson plans for in-person or digital instruction.